I am going to date myself here … It was October 11th 1975 it was a Saturday night and I was a freshman at Ricks College.  I was in the TV lounge and we hear this.

The 1st Saturday night live and I knew then my life would never be the same.   The show influenced so much of my life with so many talented performers

One great Saturday night live memory would come the next year still at Ricks but not in front of a TV but sitting in the arena at Ricks waiting to see The Carpenters in concert when the warm up act came out with a Banjo and a fake arrowhead on his head.  It was Steve Martin and the next Saturday there he was on Saturday night live.

“Baseball has been berry, berry good to me.” (Garrett Morris as baseball player Chico Escuela)

Ve just vant to pump – you up!” (Dana Carvey and Kevin Nealon as Hans & Franz)

“I’m good enough, I’m smart enough, and doggone it, people like me!” (Al Franken from Daily Affirmations With Stuart Smalley)

“We like ourselves, don’t we?” (Dana Carvey as The Church Lady)

“…Not!” (uttered by Mike Myers and Dana Carvey as Wayne Campbell and Garth Algar following any statement on Wayne’s World)

“I can see Russia from my house.” (Tina Fey as vice-presidential candidate Sarah Palin)

To be honest there was always a way to see which of my friends had been watching Saturday Night live.  On Sunday mornings at Church you would see the guys shaking their bodies like Steve Martin and Dan Akroyd and the 2 WILD AND CRAZY GUYS! All we had to do was to use any one of the catch phrases and you would hear the giggles of a bunch of WILD AND CRAZY GUYS LOOKING FOR THE FOXES! 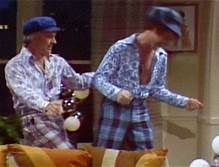 Thankfully later the Church Lady would come along to save us… 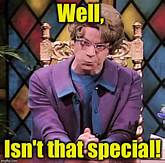